Nearing the end of a long day’s driving, we came across the village of Longparish, Hampshire. Remarking that we had not seen a war memorial window for quite some time, we eventually found the picturesque church of St Nicholas. On entering, I noticed a striking window at the far end of the north wall, and our patience was more than rewarded. 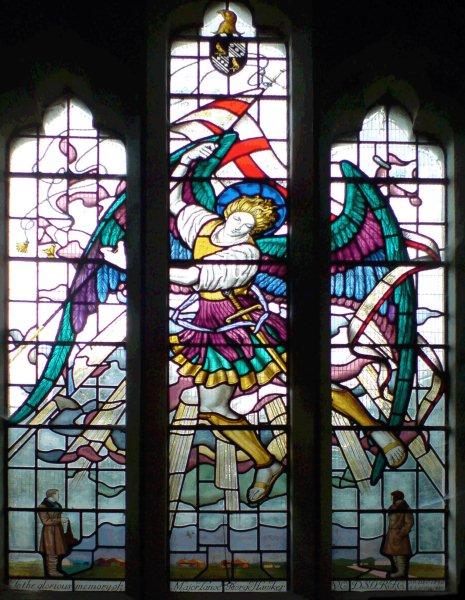 Depicting St Michael looking down in triumph from the heavens, with representations of two airmen gazing at their hangars, it is dedicated to Major Lanoe George Hawker VC, DSO, RFC. It sits amongst a series of memorials to members of the Hawker family, many with military connections stretching back to the eighteenth century. The airfield shown is that at Bertangles, from which Hawker flew. 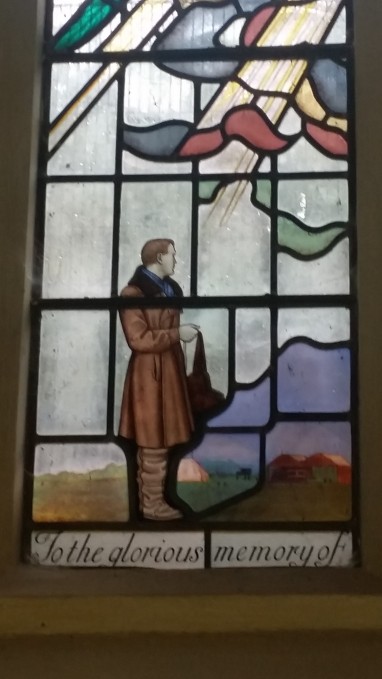 Detail from the Hawker window 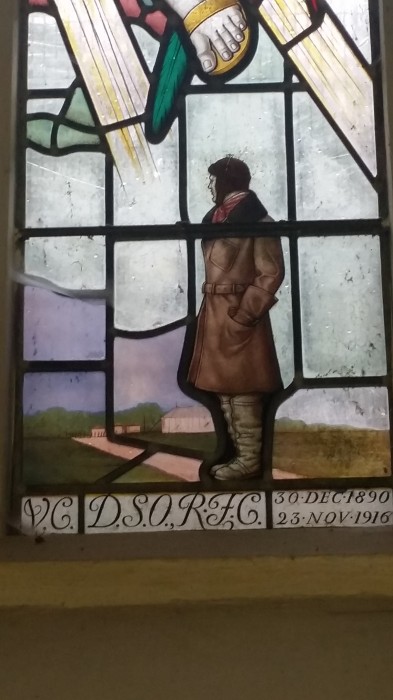 Lanoe Hawker was one of the early flying `aces’ of the First World War. Serving in France from 1914 onwards, he was instrumental in the development of many mechanical improvements in the operation of aircraft in warfare. He also introduced the idea of thigh-length sheepskin boots to protect pilots from frostbite whilst in the air.

In April 1915, Hawker was awarded the DSO for an engagement with a German Zeppelin. His citation, reported in the London Gazette of 8th May 1915, read:

For conspicuous gallantry on 19 April 1915, when he succeeded in dropping bombs on the German airship shed at Gontrode from a height of only 200 feet under circumstances of the greatest risk. Lieutenant Hawker displayed remarkable ingenuity in utilizing an unoccupied German captive balloon to shield him from fire while maneuvering to drop the bombs.

On 25th July 1915, he became the first fighter pilot to be awarded the Victoria Cross. The London Gazette of 24th August 1915 reported:

For most conspicuous bravery and very great ability on 25 July 1915. When flying alone he attacked three enemy aeroplanes in succession. The first managed eventually to escape, the second was driven to the ground damaged, and the third, which he attacked at the height of about 10,000 feet, was driven to earth in our lines, the pilot and observer being killed. The personal bravery shown by this officer was of the very highest order, as the enemy’s aircraft were armed with machine guns, and all carried a passenger as well as a pilot.

Eventually Hawker’s luck ran out, and he was shot down and killed by the `Red Baron’, Manfred von Richtofen on 23rd November 1916. Von Richtofen gave an account of this engagement in his autobiography, Red Air Fighter (1917)

In view of the character of our fight it was clear to me that I had been tackling a flying champion. One day I was blithely flying to give chase when I noticed three Englishmen who also had apparently gone a-hunting. I noticed that they were watching me and as I felt much inclination to have a fight I did not want to disappoint them.

I was flying at a lower altitude. Consequently I had to wait until one of my English friends tried to drop on me. After a short while one of the three came sailing along and attempted to tackle me in the rear. After firing five shots he had to stop for I had swerved in a sharp curve.

The Englishman tried to catch me up in the rear while I tried to get behind him. So we circled round and round like madmen after one another at an altitude of about 10,000 feet.

First we circled twenty times to the left, and then thirty times to the right. Each tried to get behind and above the other. Soon I discovered that I was not meeting a beginner. He had not the slightest intention of breaking off the fight. He was traveling in a machine which turned beautifully. However, my own was better at rising than his, and I succeeded at last in getting above and beyond my English waltzing partner.

When we had got down to about 6,000 feet without having achieved anything in particular, my opponent ought to have discovered that it was time for him to take his leave. The wind was favorable to me for it drove us more and more towards the German position. At last we were above Bapaume, about half a mile behind the German front. The impertinent fellow was full of cheek and when we had got down to about 3,000 feet he merrily waved to me as if he would say, “Well, how do you do?”

The circles which we made around one another were so narrow that their diameter was probably no more than 250 or 300 feet. I had time to take a good look at my opponent. I looked down into his carriage and could see every movement of his head. If he had not had his cap on I would have noticed what kind of a face he was making.

My Englishmen was a good sportsman, but by and by the thing became a little too hot for him. He had to decide whether he would land on German ground or whether he would fly back to the English lines. Of course he tried the latter, after having endeavored in vain to escape me by loopings and such like tricks. At that time his first bullets were flying around me, for hitherto neither of us had been able to do any shooting.

When he had come down to about three hundred feet he tried to escape by flying in a zig-zag course during which, as is well known, it is difficult for an observer to shoot. That was my most favorable moment. I followed him at an altitude of from two hundred and fifty feet to one hundred and fifty feet, firing all the time. The Englishman could not help falling. But the jamming of my gun nearly robbed me of my success.

My opponent fell, shot through the head, one hundred and fifty feet behind our line

Hawker’s machine gun was removed from the wreckage of his aircraft and von Richthofen kept it as a trophy at his family’s castle. The body was buried by German infantry soldiers and precisely recorded as 250 yards (230 metres) east of Luisenhof Farm along the roadside. However as the land was fought over many times in the subsequent two years, the exact location was lost, and Lanoe Hawker is officially commemorated on the Arras Flying Services Memorial.

Therefore the memorial window, designed by Francis Skeete and installed in 1968, is a striking and fitting memorial to an individual who played an important role in the development of aerial combat. In addition, his is one of many memorials which places the nature of his sacrifice within the wider context of that of his family and community, an aspect of war which can be found in many parish churches across the country.

The Running Man in Blue

My adventures of running, training and life.

Writing on the run by Liz Champion

Looking at the members of the Surrey Association of Church Bell Ringers who served in the First World War, and closely related matters

Religion in Britain, Past and Present

Thinking forward through the past in religion and education

The History of Parliament

Blogging on parliament, politics and people, from the History of Parliament

Parliament and Women in the early 20th century

snippets from my History PhD and elsewhere

Northumberland churches and quite a few from elsewhere. Plus a Hadrian's Wall Walk.

For Christ and Culture

A Ministry of Criswell College

I hope to be remembered for my atrocities!

Human history becomes more and more a race between education and catastrophe.

Come Step Back In Time

Discover a passion for history....

This Is Where The Magic Happens

Now England has become my home

The Art and Craft of Blogging

The latest news on WordPress.com and the WordPress community.